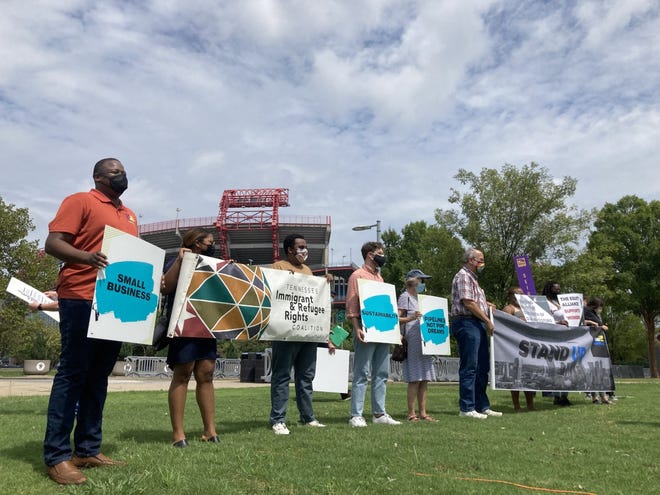 Representatives from multiple Nashville labor and equity organizations stood against the backdrop of the Cumberland River on Wednesday with one resounding request: slow down the East Bank Planning Study and increase community engagement.

The Metro Nashville Planning Department partnered with global design firm Perkins Eastman for the multi-month study that focuses on redevelopment and land-use plans for 338 acres along the Cumberland River.

The stretch of land stands to be one of Nashville’s largest and most impactful redevelopment sites in recent memory.

Global software company Oracle Corp. will build a $1.2 billion campus in the area, taking up more than half of Monroe Investment Partners’ 125-acre River North project. The first portion of the project, a 40-acre group of office towers behind Topgolf, is already underway.

The study aims to engage the community and provide opportunities for public input on new roads, parks, greenways and attractions. Metro and Perkins Eastman created a Neighborhood Advisory Committee, and Metro Planning has held 15 public engagement opportunities with more than 400 participants since February. A community survey received 605 responses.

But a coalition — including Stand Up Nashville, The Equity Alliance, LiUNA, Nashville Organized for Action & Hope and the Tennessee Immigrant & Refugee Rights Coalition — said the study’s methods so far have been “flawed” and “disappointing.”

The coalition said the study lacks transparency and broad, unfettered opportunities for those impacted by East Bank development to weigh in. The groups sent a letter and four-page document detailing their concerns and recommendations to Nashville Mayor John Cooper, the Metro Council and the Metro Planning Department on Wednesday. 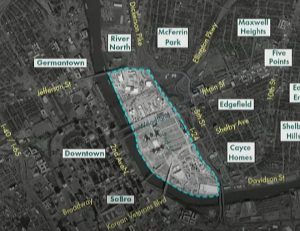 “The number one recommendation is this: slow it down,” Odessa Kelly, executive director of Stand Up Nashville and Democratic congressional candidate, said in a statement. “Attempts at community engagement have been too few and too controlled. Give residents the chance to offer real input, and expand outreach to the whole city, in communities that will actually supply the workforce for these new businesses.”

“The East Bank represents both the most valuable underdeveloped land in the heart of our city, and Nashville’s largest opportunity for advancing racial and economic inclusion,” the letter states.

Richel Albright, a spokesperson for Metro Codes and Planning, wrote in an email to The Tennessean that the first phase of the study aims to “establish essential public standards” including environmental resiliency, mobility and quality open space.

“These are the basic building blocks needed to direct and manage future development in the area, including proposals for housing and many other uses desired by our community,” Albright wrote.

“We have also pursued opportunities to hear directly from adjacent neighborhoods, as well as broader audiences. … We have sought the advice and input of residents, businesses, and local organizations for any opportunity to broaden our outreach to all,” Albright said in a statement.

Cooper’s office in a statement called the East Bank the city’s “next great neighborhood.”

“Mayor Cooper’s vision is for the East bank of Nashville’s river to become our city’s next great neighborhood through an expert planning process that includes strong community engagement,” Cooper spokesperson Andrea Fanta said in a statement. “Nashville continues to work with a diverse group of neighbors and stakeholders toward that goal.”

The East Bank Planning Study kicked off in February. Metro Planning hosted 15 events, including three public planning and design workshops in July and one in August that offered opportunities to give feedback through organized activities focusing on public spaces, mobility, land use and other topics. Metro mailed notice of engagement opportunities to East Bank area property owners and those in surrounding areas. In total, 141 people attended the July workshops, and about 30 people attended in August.

A total of 605 people participated in the study’s online survey from July 14 through July 23, but 83% of those who responded were white, and just 4.5% said they work or own property in the East Bank, according to Metro’s July public engagement report.

The study is in its final recommendation phase before drafting a initial plan for mobility and open space in the fall, according to its original timeline.

“Outreach efforts have involved only a few people of color and seem to have focused on developers, architects and other professionals,” the coalition wrote in its letter to Metro officials. “Families of modest means, who are being priced out of Nashville, have not been drawn into the process, even though they are affected more than any other group.”

The coalition also said the workshops “seemed to deliberately avoid any mention of uncomfortable realities, preferring instead to focus on all of the beauty and leisure activities that the development would bring to the city.”

Brenda Waybrant, co-founder of Restaurant Opportunities Center – Music City, said she spent seven of her 15 years in restaurant work near the East Bank area. She and many of her colleagues couldn’t afford to live near their place of work, so they shouldered costs of downtown parking or Uber rides — totaling $25 to $30 — every day.

For back-of-house workers who might make $12 an hour, “that’s two or more hours of work just to get to the building that they work in,” she said.

For her, the East Bank needs to prioritize good jobs as well as affordable housing and transportation for workers to be successful. Others stressed the long-term consequences of displacement as property values rise.

Michael Street, a lifelong Nashvillian and owner of a contracting business with 25 local employees, said he wants the city to involve local, minority-owned businesses in development projects. Street grew up in North Nashville but now lives on the city’s outskirts because of rising housing costs, he said.

“I want to see working class people living in the urban core of Nashville,” Kelly said. “(When) we build this East Bank development out, it shouldn’t just be for those who make over $70,000 a year.”

The coalition made several recommendations, including:

Article by: Cassandra Stephenson, as reported in The Tennessean