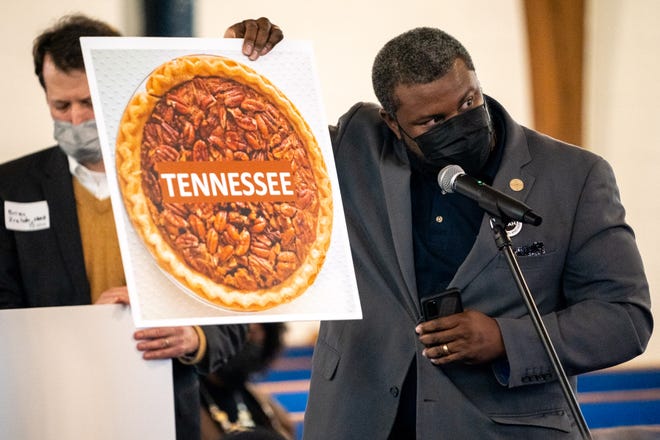 More school counselors, more school nurses, more social workers and more special education assistants. These are all things that many of the attendees at a recent school funding town hall in Nashville want for K-12 schools.

But most of all they want a larger pie.

And by pie, they mean they want the state to increase the money it spends on K-12 public schools.

Nearly 100 people attended the town hall, hosted by the Tennessee Alliance for Equity in Education, in partnership with Education Trust – Tennessee and Nashville Organized for Action and Hope, or NOAH.

At various points, the crowd roared “We want a bigger pie” in response to prompting from speakers during the public comment portion of the meeting.

The town hall was the latest of many occurring across the state this fall since Gov. Bill Lee and Education Commissioner Penny Schwinn launched a review of the state’s current funding formula with the aim of creating a new “student-centered” funding strategy.

Among those in the pews at Jefferson Street Missionary Baptist Church on Monday night was Seth Thorpe, a senior at Pearl-Cohn High School, who said he has never had a consistent math teacher for an entire school year.

Nadia-Grace Freeman, a sixth-grader at West End Middle School, was there, too. Her comments caused a hush to fall over the church.

Freeman asked the state’s top schools chief and a staff member to educate teachers on strategies to mitigate bullying — a big problem that she said “really matters” at her school. She also said her teachers and classmates need funding for supplies.

“There’s an art club but some people can’t participate because they have to bring their own supplies sometimes and it’s something that a lot of people can’t join because they don’t have supplies and they can’t show their creativity,” the 11-year-old explained.

Cassandra Cosgrove, an English language teacher at Shwab Elementary, was also in the crowd. She worries that teachers try their best to meet the legally mandated needs of students with disabilities or English language learners, but they are only able to do the bare minimum because of antiquated staffing models that leave many schools under-resourced.

Robert Taylor, a former Metro Nashville school board candidate and a parent of seven, not only asked for more pie as he presented two large photos of pecan pie to the commissioner, but he also asked for Tennessee to love its children.

Tennessee currently ranks 44th out of 50 states and the District of Columbia when it comes to per-pupil spending, paying out nearly $4,000 less than the national average, according to an October report by the Education Law Center.

Taylor depicted the disparity by hoisting a small poster of a pie labeled Tennessee, juxtaposed next to a poster more than four times its size.

MORE:What to know about Tennessee’s school funding formula — and the plans to change it

The many speakers weren’t the first group to call for increased funding for public schools. Since the governor’s announcement in October, superintendents across the state have spoken out, many arguing that conversations about a new funding formula are null without a promise for more funding.

Hundreds have attended eight town halls hosted by the Tennessee Department of Education across the state over the past six weeks, citing needs for more student support roles (counselors, nurses, social workers), school resource officers and resources for students with disabilities, English language learners and students from low-income communities, Schwinn told the crowd.

Even Ed Trust – Tennessee and the alliance have publicly shared their own recommendations, including a call for increased funding and equitable distribution of funds, with more money going to poorer districts.

But Monday night’s crowd was the first to present Schwinn with a pie, tying the metaphor of the night together.

The Rev. Perry Wiggins III of Alameda Christian Church in North Nashville handed the pie — a pecan pie from Sweet Creations Pie Bakery — to Schwinn after first sharing his own thoughts.

“The state of Tennessee chronically underfunds public education and too often fails our children. Education of children is a moral obligation,” Wiggins said. “The state of Tennessee spends over $30,000 a year to incarcerate a person in prison; it spends around $11,000 a year to educate a public school student. if we spend more on education, we will spend less on incarceration.”

Wiggins shared the stories of college students he mentors who struggled to learn English without much support at school as new arrivals to the country.

“These are stories that I hear from so many many of my students. This cannot happen in our schools. We need more funding so that students can receive all the educational supports they need and deserve. So what do we want?” he urged the crowd.

“A bigger pie,” they roared. 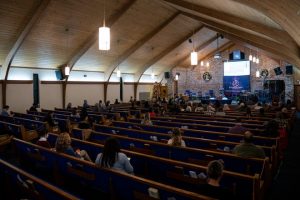 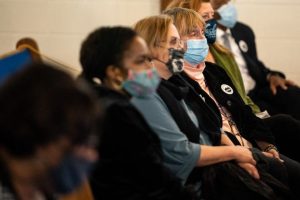 Article by Meghan Mangrum, as published in The Tennessean